All pictures below (except one) are frame grabs from HD video footage. Please note that these are 8-bit pictures (not RAW).

Copyright
Pictures and videos are Copyright (C) 2013-2015 Richard Eller unless otherwise marked. According to Finnish Law, you may download copies of these pictures for your none-commercial personal use and show them to your family and closest friends. All other use is prohibited without prior written permission.

Diving this shipwreck requires a special diving permit from the Finnish Defence Forces and Finnish Military Museum. V308 was sunk by the Russians September 23, 1941. The wreck still has live ammunition that has not been salvaged. On the video you can antiaircraft guns and depth bombs on deck.

Two Northern Light Scuba 300 LED lights were used for illumination. The video was shot during a single dive with a Canon 5D III in an Aquatica housing.

Here are some low-res framegrabs of the video: 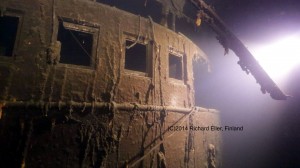 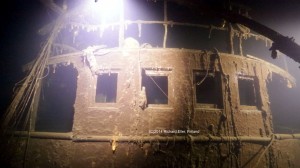 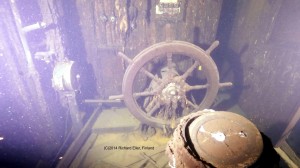 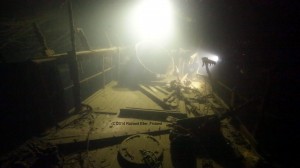 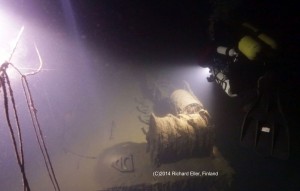 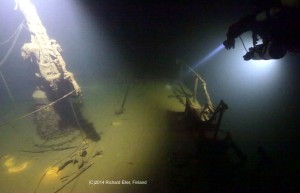 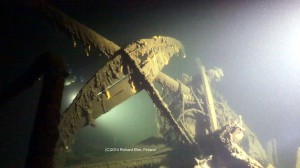 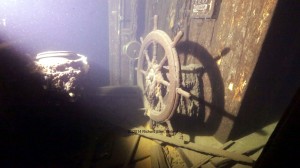 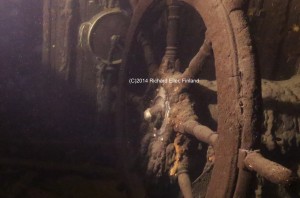 Please enjoy this Full HD video with some militaristic music:

The steamship Klaus Oldendorf was built in 1892. It was sunk in 1942, probably by a torpedo of a Russian submarine. All men were lost. The wreck is located south of Porkkala, almost halfway between Finland and Estonia.

The video below was shot with a Sony MC50E video camera equipped with an Aquatica/Amphibico HW Wave underwater camera housing. A single 200W HMI lamp was used for illumination.

Klaus Oldendorf – Tales of Old from Richard Eller on Vimeo.